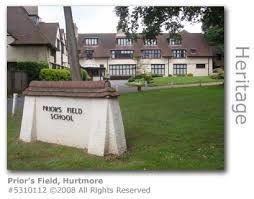 Prior's Field School opened on 23 January 1902. It was founded by Julia Huxley, who was the mother of Julian Huxley and Aldous Huxley, the niece of the poet Matthew Arnold and the granddaughter of Dr. Thomas Arnold, the headmaster of Rugby immortalised in the novel Tom Brown's Schooldays. The Huxley Family is interesting historically for the achievements of several of its members across the fields of science, medicine, literature and education. Julian Huxley would go on to become a biologist, the first Director of UNESCO and a founder member of WWF. Aldous Huxley was the eventual author of Brave New World, published in 1932. W.B. Yeats, George Bernard Shaw and Lewis Carroll were family friends, and the school motto "We live by Admiration, Hope and Love" is from The Excursion by William Wordsworth.

Soraya French, President of the Society of Women Artists (SWA) will open AppArt's Easter Art Exhibition & Sculpture Trail at Prior's Field School, Godalming on Saturday 1st April at approximately 10am. Soraya has been a regular exhibitor at AppArt over many years and we are delighted that she will open AppArt 2023 and also exhibit. […]