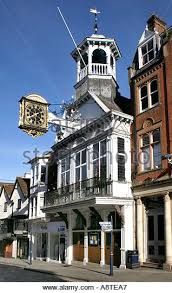 Formerly used as a courtroom and later as a Council Chamber. Constructed in the 14th century, the Guildhall stands today as a noticeable landmark of Guildford. The north end was extended in 1589 and the Council Chamber was added in 1683. The building facade was also constructed in 1683 and features an iconic projected clock which can be seen throughout the High Street. An extensive restoration was conducted in 1987. It is a Grade I listed building.