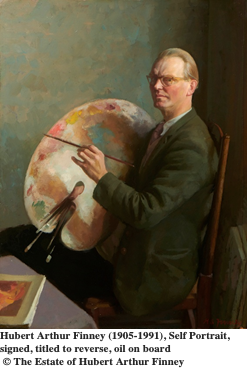 Amongst Finney's most original and modern compositions are his interior and exterior views illuminated by artificial light – city streets and domestic interiors – which form a counterpoint to his more traditional gentle Berkshire and Surrey landscapes, painted preferably at dawn and dusk.

For Finney, who had a reclusive personality, drawing and painting served both as a means to approach the world but also as a place where he could find refuge from it. His subject matter moved unconsciously between two domains - that of daylight hours, and that of the night. The former resulted in compositions capturing subtle changes in light and colour -  but, there is almost always a sense of light fading, dissipating into the dark . Night-time appears to be the habitat where Finney, his compositions emerging out of the shadows, was more naturally at home.

Initially studying painting under Amy Browning and Percy Jowett, and etching under Eric Gill, Finney went onto the Royal College of Art where he became a protégé of William Rothenstein. After a travelling scholarship to Rome, in 1929, Finney returned to become a teacher at Chelsea School of Art - working alongside Henry Moore who was in charge of the Sculpture Department and Graham Sutherland, the Department of Design.

In 1939, Finney joined the Light Rescue Service of the Civil Defence - producing a fascinating series of images of life on the Home Front.  After the war he took up a part-time teaching post at Reading University and remained in charge of life drawing until his retirement in 1970.

During the 1960s Finney spent a year in America, on an exchange program at the University of Wisconsin, living in Milwaukee. While there, he produced a vibrant body of new work inspired by friendships with celebrated American artists such as Joe Freibert and Danny Pierce.

In spite of a retrospective at the University of Oxford's Institute of Education in 1964, Finney's star, at the time barely resonant enough to leave more than a faint trace, has since all but passed into oblivion. Even with a nod in the direction of Finney's own self-effacing sense of modesty it is surely time to bring his work back to public attention – out of the shadows and into the limelight.

Hubert Arthur Finney: Out of the Shadows will be on show at The Lightbox gallery and museum from 15 January – 27 March 2022. For further information on the exhibition please visit thelightbox.org.uk.