Join the Surrey Mozart Players for the finale of their 2021-2022 Season with a thrilling concert of 19th century musical masterpieces. Brilliant violinist, Alexander Sitkovetsky will be performing Beethoven’s much-loved, lyrical and spirited Violin Concerto. Alexander has been a regular soloist with the SMP over recent years and has always been a firm favourite with Guildford audiences.

The orchestra will also be playing Dvorak’s glorious Seventh Symphony. Although known as the ‘London Symphony’ due to its premiere in England, this is one of Dvorak’s most nationalistic works full of Slavonic melodies and references to his Czech homeland.

The Surrey Mozart Players, conducted by Alexander Walker, are delighted to present a concert of much-loved classical favourites which should be perfect to dispel any January blues. Talented young violinist, Ionel Manciu, joins the orchestra to perform Mendelssohn’s Violin Concerto, one of the greatest violin concertos of all time. This is followed by arguably Mozart’s greatest symphony – No. 41. Known for its good humour, energy and large scale for a symphony of the time, it was nicknamed “Jupiter”, after the chief of the Roman gods. The concert starts with the exuberant Barber of Seville Overture by Rossini. 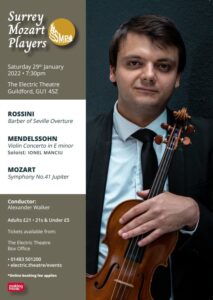 The Surrey Mozart Players are widely regarded as the UK's premier non-professional chamber orchestra, drawing its members from Surrey and surrounding counties. The orchestra performs a series of 5-6 concerts each season at the Electric Theatre, Guildford, under the baton of their Music Director Kenneth Woods.