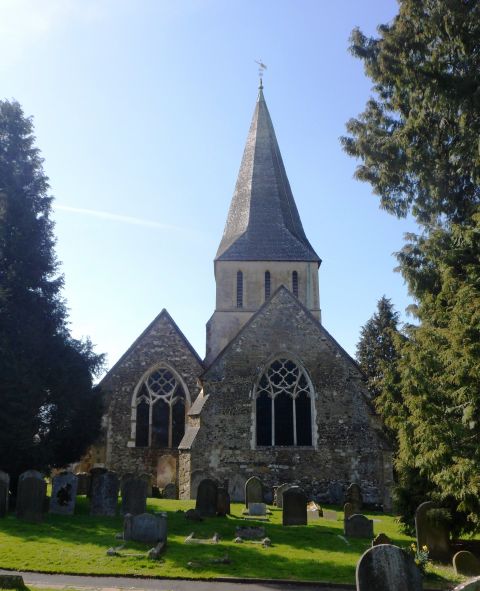 This has been a place of worship since 1190. The spire, built between 1213 and 1300, is an excellent example of a brooch spire. It was covered with cedar shingles, but in 2000, these had to be replaced and handmade oak shakes were used. There are several brass plaques in the chancel dating from 1412, excellent for those who seek to take brass rubbings.

The church is Norman, most being 12th, 13th and 14th century, of ironstone rubble with sandstone buttresses, restored in 1895 by S. Weatherley. By the north chancel wall there is a 14th century quatrefoil window and squint – belonging to Anchorite Cell. There is 14th century glass in the east window and the chancel fittings were renewed in 1956 by Louis Osman.

An intriguing aspect of St. James’ Church, is The Anchoress of Shere. Christine Carpenter, in 1329 made a solemn promise to devote her life to God and live in a holy place. On 14th August 1329, the Bishop of Winchester gave permission for her to be enclosed in a cell which was built in the North wall of the chancel. Food and drink was given to her through a grating on the outside wall. On the inside of the church can be seen the Quatrefoil through which she received the bread and wine of communion. Through the squint window, she could see the altar. Not surprisingly, after three years, she decided to leave her cell, but for reasons unknown, it is recorded that on 10th November 1332, the Bishop of Winchester agreed to her request to be returned to the cell so “she may be enabled to achieve her salvation”. William Carpenter, her father, it is believed, lived where the Willow and Ash Cottages now stand in Lower Street. These were built about 1475.

The Lych Gate was designed in 1902 by the architect, Edwin Lutyens, who later became Sir Edwin Lutyens and designed the Cenotaph in Whitehall, London. He designed various buildings in Shere for the Bray family, who have been Lords of the Manor of Shere since 1487. These include The Manor House Lodge and Western Cottages in Upper Street and the building in Middle Street, now used as the Tea Room. (Thanks Tristan!)

The attractive nature of our villages means it is often used for TV/Film location filming, notably The Holiday and Bridget Jones’ Diary.