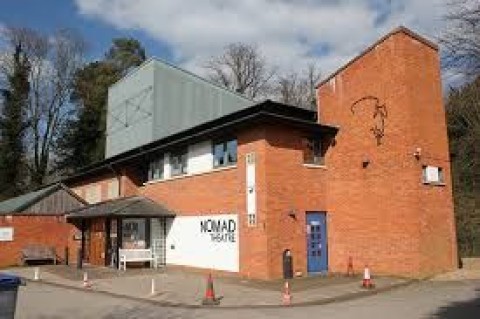 The Nomad Theatre is located behind Bishopsmead Parade in East Horsley, Surrey.

The story started in 1934 when the Nomads staged their first play, Journey’s End, in the Guildford Borough Hall. From then until 1957, performances were held in local halls and rehearsals took place in various different places – leading to the name Nomad Players.

In 1957, the society was given some land with a building  on it which up till then had been used as a builder’s store and this was converted by the members into a small theatre. Since then there have been many changes. The purchase of a wartime timber  building use to house a bar and new wardrobe happened in 1979. By the time the group celebrated its Diamond Jubilee in 1994 it had become a charity, Nomad Players Limited, and had started a weekly children’s drama workshop – the Nomes. By then the Young Nomads had been active for 20 years and the group had become a member of the Little Theatre Guild of Great Britain. It was also becoming obvious that the old theatre would need replacing and plans were being drawn up, but financing such a project was always going to be a problem. Happily, the National Lottery had just appeared on the scene and The Nomads were one of the early applicants.

The National Lottery gave us a unique opportunity to develop a theatre that provided all the facilities we need for our wide-ranging drama activities. From our preliminary application onwards the Arts Council of England encouraged us to build a really well-equipped, good quality theatre.

The Nomad Players had to provide £338,000 and they managed to complete this by 2001. The last project of the new theatre development was the inauguration in February 2003 of a sculpture, Dancing Gypsy, in the theatre foyer. It was created by Faith Winter, FRSBS, the renowned sculptor.