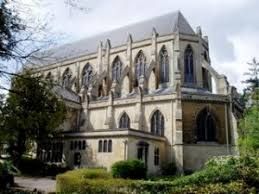 This magnificent building was constructed in the 1880s as the church of St Alban The Martyr. Originally designed for a congregation of 1200, by the 1970s it was declared redundant and was neglected for many years.

A passionate campaign led by local people eventually succeeded in saving it from demolition and in 1995 it became the home of a new community art centre – the Landmark Arts Centre.