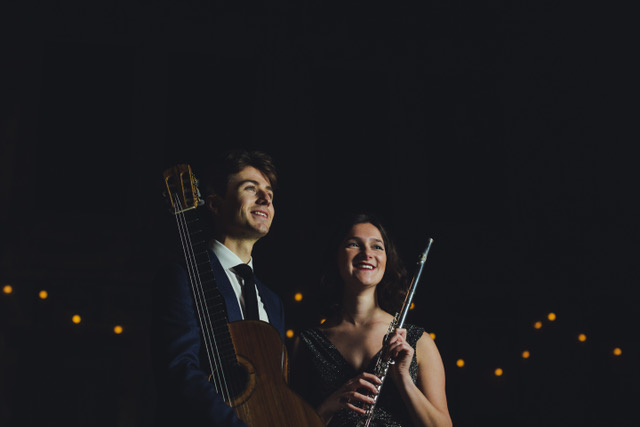 Formed in 2013, Meraki Duo enjoys exploring the diversity of repertoire available to the flute-guitar pairing while contributing new arrangements of their own. Meera Maharaj (flute) and James Girling (guitar) both studied at the RNCM, sharing a passion for chamber music that extends to jazz, Latin American and European folk, and works by contemporary composers. They love performing in a wide variety of contexts and venues; recently, these have included King’s Place for London Guitar Festival, Swaledale Festival, St James’s Church in Piccadilly, Manchester Cathedral, and the Bridgewater Hall as part of Craig Ogden’s Guitar Weekend. They regularly perform for recital series in venues spanning from Cumbria to Cornwall. In 2019, they advanced to the final of the Royal Over-Seas League Competition (Mixed Ensembles category) in London. Meraki Duo have been selected onto the International Guitar Foundation’s Young Artist Platform for 2019/20.

Alongside their concert schedule, they endeavour to bring performances into the wider community. They are Live Music Now artists and often give workshops in schools across the country, exploring music through storytelling. Additionally, they have enjoyed giving concerts at Wigmore Hall in partnership with the Wigmore Learning programme.

William Grant Still — If You Should Go